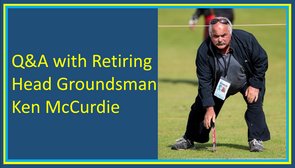 A Short Question & Answer Session with our Departing Head Groundsman.

We managed to sit down and have a short Q&A session with our Retiring/Retired Head Groundsman before he managed to escape to sunnier climes, this is the full interview as promised in our recent Mannofield Newsbites Newsletter.

1. How did you become a Groundsman?
Whilst at college in 1992, I was in attendance along with the Captain of Penicuik CC who introduced me to their club. I gave a hand with the end of season renovations and continued voluntarily for the next eight seasons putting myself through the various certifications in order to learn more.

2. How did the job at Aberdeenshire CC come about?
I had been attending various Groundsman’s courses whereby I met the incumbent of the Mannofield job. He called me to say that he had accepted a job at Sussex and that I should think about applying for the ACC position.
Interviewed then a few brown envelopes later and the job was mine!

3. What has been the highlight of being groundsman at Mannofield?
The ODI’s with New Zealand then England would be the main matches to highlight although playing under lights and the multiple day games also spring to mind.

4. What has been the worst thing you encountered as groundsman at Mannofield?
Weed killer-gate. During the Winter of 2011/12, I began to notice areas of grass on the square dying off particularly on a length at each end of the square. Clearly weedkiller had been applied and it looked likely that it had been poured straight from the bottle and therefore undiluted.
A chemical analysis of the affected areas revealed that the toxin in the weedkiller was one that effectively sterilised the soil meaning that even newly sown seed wouldn’t establish.
In effect, I was left with 5 of my 14 pitches to see me through the following season.
At the end of that year the top was skimmed off the square to remove any residual chemical. Costly but effective.

5. You have had a number of assistants over the last 20 years, who were the best and worst?
BEST: Andy Lewis, took pressure off me when we had mechanical breakdowns.
Carl Frauenstein, who had worked on grounds before.
Kenny Reid, who “owned” his outfield.
WORST: Kenny Reid, running the Gator into the back of the tractor. “Oh, is that one the brake pedal?”
Ritchie Lamb, “I only like to do work that I can sit down to do”!
Calum Howard, when he’s prattling on about the team in green from Glasgow.

6. Who have been the worst players you have had to deal with during your time at Mannofield?
(Have there been any N. O’Bs?)
The Niall O’Brien incident was akin to a storm in a teacup. In a way it gave the Press a story on a day when the ground had flooded overnight and swamped the entire field meaning that no play would have been possible.
I’m sure if we met again we’d shake each other warmly by the throat!

7. You used to get involved in the fine sessions in the dressing room after games, who initiated that and why did it stop?
Unsure as to who initiated these sessions but I faded from attending when it became more of a “serious”, what happened out there today, type of session.
Much better before when we had the likes of Gilly, Bran-dog, Toddy and Macca as Finemasters.

8. What would you like people to remember your time at Mannofield for in terms of the ground, the pitches and yourself?
That I was able to be professional when it came to the ground but could mix and match with members once I was “clocked out”.
I still hold the record for gin drinking!!

9. You have had a number of international games at Mannofield over the years, what have been the best, worst and most stressful of these?
BEST New Zealand, Ireland and Scotland tri-series.
WORST As previously mentioned, cloudburst overnight during the Ireland 4-day match.
STRESSFUL England live on Sky game when 6 hours of rain fell from the scheduled start time resulting in a reduced match but all the time under the scrutiny of the cameras.

10. You won a number of Groundsman of the Year awards for your work at Mannofield, how did it feel to win them?
A nice accolade winning seven times in eleven seasons especially satisfying when it is decided by the accumulation of a seasons worth of umpire’s reports.
Being awarded the UK trophy for best private club ground, saw me being headhunted for the assistant head groundsman’s position at the Oval but felt the commute would be excessive!

11. Is it true you don’t actually like cricket?
I understand the game, enjoy watching it but I’m far from being an aficionado of the leather striking the willow.

12. What will you miss most – Your empire of the ground or the nights in the bar drinking Gin?
Living in close proximity to the clubhouse, I’m not in all that often apart from playing in the Social League but will I miss the ground? No I don’t think so.
Groundsmen get labelled of being a grumpy lot but we are grumpy because we care. I found myself being more accommodating. Never a good sign.

13. Who will you miss most and least from the club?
Loaded question but I would have to say The Corner Crew, you know who you are.

14. Finally, for those that don’t know already what are you planning to do now you are retired?
Lockdown has prevented me retiring out to the Canary Islands to enjoy some relaxation and motorcycle riding but hopefully should be there July-ish.