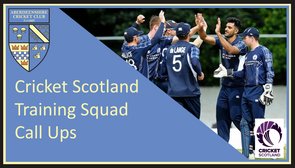 The club would like to congratulate Joseph Horne and Aayush Dasmahapatra on their inclusion in the Cricket Scotland Under 17 and Under 19 Spring Training Squads.

This means that the pair of them will be travelling to Edinburgh regularly to train in The National Cricket Academy at MES throughout the next couple of months, dependent on Scottish Government and Sport Scotland regulations and advice.

These call ups come on the back of a successful 2020 season for both players.

Joseph performed well as Wicket-Keeper and Middle Order Batsman for the first team, in the games that we managed to play, as well as being named captain of the Caledonia Highlanders Under 16 squad. Aayush started playing his senior cricket with Aberdeenshire as well as his junior cricket, and performed well for the first team opening the batting and contributing with vital wickets with his leg spin bowling, he was also part of the Caledonia Highlanders Under 16 squad.

These call ups to the national training squad are deserved rewards for the guys hard work and eagerness to improve their game.

The club had other junior players involved with representative squads during the 2020 season, full list below: