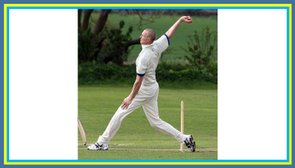 Having played for the club in two separate spells either side of a spell with Heriots whilst at university in Edinburgh, Chris has also represented Scotland Under 19's at the 2002 Under 19 World Cup in New Zealand and has recently stepped down as Cricket Convener after a couple of years in the role.

In his own words Chris is probably best remembered for being a pretty tall bloke who played the game with plenty of respect for those around him, playing the game hard on the field but being a good guy off it. He regrets not spending a bit more time in the nets honing his batting skills, although his one and only career six was a lap sweep at Carisbrook, New Zealand, against some future Aussie superstars in the Under 19 World Cup.

Cricket to Chris now is watching his son starting to enjoy the game we love more and more and Chris promises he’ll be back on the pitch one day with Kenzie for a little while. Although hopes that will be a bit more relaxed than the games and the road trips that he will always remember from his time in 'Shire colours.

Chris West is the latest to provide us with his memories of playing for the club:

2. What is your first memory of Mannofield or Aberdeenshire?
Hundreds of kids turning up to Sanju and Anju’s Mudkavi’s weekly sessions in the early 90’s, a veritable melting pot of talent for my generation of cricketers. We got very lucky with those guys.

3. Who or what inspired you to play cricket?
The first two guys that pushed me toward Aberdeenshire were John Muckersie (Club stalwart) and Dyce Patterson (Next door neighbour and former Grammar PE teacher), but it was Sanju and Anju that turned me and hundreds of others at the time into cricketers. Later on Mike Hendrick taught me about “Hard Cricket” and Willie Morton taught me how cricket and life should be enjoyed – but what inspired me? Sunshine summer days, glorious grounds (None bar Mannofield!) and great competition.

4. What does it mean to you to have represented Aberdeenshire?
I didn’t think about it enough during my first stint at the club but I remember suddenly realising how much it meant the season I started playing for Heriots, I played against Aberdeenshire in a game at the end of the 2003 season where a heriots win meant Shire were relegated, my very frugal 15 overs for not very much being my contribution that day, and I can remember Floppy couldn’t look at me heading away from Goldenacre. It meant a lot to have represented the club again from 2007, finish my competitive career there, share in some awesome memories and hopefully build those bridges back up

5. Tell us about your debut for Aberdeenshire.
1st of July 2000, dustbowl at Boghall, I’ve just finished my first year at university and am about 3 stone heavier than when I started……Hazy and Shay pick me up in Edinburgh and head for Linlithgow. I don’t get thrown the ball that day, I don’t score a run but I take a catch and help salvage a (losing) draw. So didn’t do much on my debut but had a massive McDonalds on the way home (standard), learned all about Champagne cricket from Shay and Hazy! Finally got thrown the ball a couple of games later and the wickets started flowing……

6. What was your best performance for Aberdeenshire?
Can’t remember my best figures to be honest but one that I do remember was at Uddingston midway through the 2009 season, we’re defending 235 and they’re going ok 130 odd for 3. The ball starts coming out sharp in my second spell down the hill and I nipped out their middle order for a Michelle……good times.

7. What is your favourite memory of playing for Aberdeenshire?
2009 hands down, awesome guys, awesome season on every level, don’t think I ever played in a better team for a whole season. Belief and momentum carried us through 2009 and every time the chips were down someone stood up and took the game away from the opposition. It sounds a bit soft to describe that year as magical but there was certainly something special about it.

8. What is your favourite memory of Mannofield?
Getting served drinks out the back of the beer tent with Andy Innes and the Dalglish twins at the Australia game back in 1997 – Jason Gillespie’s run up starting from what seemed like the boundary, Alan D spewed his ring, first messy day out at the cricket in the sunshine!

9. Who was your favourite teammate in your time at the club?
Gotta be the wee man with the biggest angry streak……. Andy Innes

10. In your opinion, who was the best player you played with at Aberdeenshire?
There are genuinely too many, Floppy a keeping supremo, Crossy loved to ping a hook shot for 6, Bonesy an awesome opening partner upfront, Brando the most annoying guy on the morning bus ever – would score 50 in ten overs upfront with a hangover and absolutely mental on the booze, Macca batting like a metronome and a big fan of the Yaaaat, Gillie the most aggro all round cricketer (and lodger) I’ve ever met……..Kevvy Thomson wicket to wicket and angry as fu**….literally too many to pick from!

11. Who was your favourite overseas professional from your time at the club?
Some great guys over the years for various reasons but Todd Astle, hands down, proper cricketer and awesome bloke.

12. Who was the toughest opponent you played against as an Aberdeenshire player?
Toughest I’ve ever bowled at was Rahul Dravid it wasn’t for Shire though, nothing like a super star to make you feel pretty ordinary! For Shire, I remember a particular tough red letter day against Craig Thyssen where he was flat batting me back over my head and seemingly taking shots at individual roof tiles round the ground. But there have been a few players over the years that have just seemed to be tougher than most to get out at Mannofield, Majid Haq & Neil McCullum always seemed to go better than most.