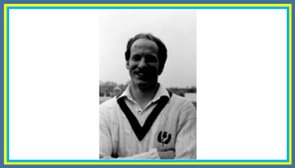 Dale de Neef, our current Cricket Convener, provides some memories from his time as a player at Aberdeenshire CC

Dale de Neef played for Scotland 11 times following his move up to Aberdeen and during his time representing Aberdeenshire CC. Cricket has continued to play a large part in his life and he has played a role in a number of different roles in the running of the club and is currently our Cricket Convener.
We asked him some some questions based on his memories of his time as player at the club:

2. What is your first memory of Mannofield or Aberdeenshire?
Walking into the main bar and thinking wow! This is a big club - much bigger and with better facilities than any club cricket in the Sussex league.

3. Who or what inspired you to play cricket?
The West Indian team of the late 60’s 1970’s - Sobers mainly and also the great Sussex man John Snow.

4. What does it mean to you to have represented Aberdeenshire?
Aberdeenshire was a brotherhood at the time, everyone made sacrifices to play and be part of a successful team. I am immensely proud or what was achieved and to have been a small part of it, there were many star players at the time. We traveled everywhere by car and built lasting friendships. The Club was the main part of our social lives - our wives, girlfriends & mum's made the teas every week so the Club had a great family atmosphere.

5. Tell us about your debut for Aberdeenshire.
Can’t remember my actual debut - it might have been a friendly at Inverurie early Sept 1978? No on line records to look back on.

6. What was your best performance for Aberdeenshire?
Beating Ayrshire at Mannofield in a Counties game - The late great Grant Stanley scuttled Shire for a low score, around 125? I returned a career best of 9-27.

7. What is your favourite memory of playing for Aberdeenshire?
Playing against Scarborough in the quarter finals of the national club competition at Marine Road, Scarborough in front of a large partisan crowd - we lost but it was a great occasion!

8. What is your favourite memory of Mannofield?
The end of season NCA (Naked Cricket Association) with the Mannofield team!
Only those of a certain vintage will recall this event introduced by one of our best professionals Kruger van Wyk.

9. Who was your favourite teammate in your time at the club?
Willie Donald and David Johnston.

10. In your opinion, who was the best player you played with at Aberdeenshire?
Impossible to answer - there were many, I could choose any from Dallas & Jeremy Moir, CC Smith, Willie Donald, Frank Robertson, Jackie Knight, David Johnston.

11. Who was your favourite overseas professional from your time at the club?
Kruger van Wyk - what a fantastic player coach and person, the toughest sportsman I’ve ever met.

12. Who was the toughest opponent you played against as an Aberdeenshire player?
The long time pro at Fifeshire - the Barbadian Duncan Carter.
He was quick, tough on the field and could bowl unchanged as there were no restrictions. He was the master of Yorkers and undid Shire a number of times. Great man in the bar after games!