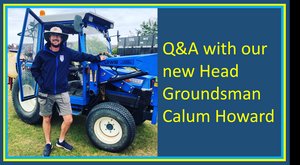 We managed to sit down and have a short Q&A session with our recently appointed Head Groundsman, this is the full interview as promised in our recent Mannofield Newsbites Newsletter.

1. You have just been appointed Head Groundsman at the most northerly ODI ground in the world, taking over from long serving Ken McCurdie, how does it feel?
It’s very exciting to finally have it all confirmed. I think most people forget Mannofield is an international ground so it’s a huge challenge but one I’m confident I can live up to with the right support. Taking over from someone as well respected as Ken is like coming in straight after Sir Alex Ferguson, lots of scrutiny from the off. But I’m ready for that.

2. Have you been looking to become a Full Time Groundsman for a while or has this sneaked up on you?
Originally working on the ground was just about being convenient for training sessions and basically being in the right place at the right time. Although once involved I decided that this was something that I really enjoyed and there was scope to take it further and develop my skills.

3. You were Ken’s assistant for 3 years now, what has been the most important thing he has taught you?
Popmaster – Radio 2, 10:25am. / When to let things go, whether that’s in dealing with people, cricketers or weather and when to make your point heard.

4. You were assistant last year for the Internationals will you be excited to see international cricket return to Mannofield?
I was gutted when the UAE games in 2016 were moved as that would’ve been my first taste of international cricket at Mannofield other than sitting in the stand at the Scotland V England ODI. Last year showed that aside from a few small differences we’ve always worked to an international standard, so the “step up” was very little, so I’m looking forward to that experience again.

5. Do you have anything in mind that you are going to tweak or change straight away?
I have some big ideas for the ground and I’m hoping the same support, faith and financing will be shown towards me as it was towards Ken when he arrived. A few ideas in regard to pitch preparation will be trialled and especially this year when there will be no league cricket, so it’s an opportunity to experiment before next season and hopefully improve on what we already have.

6. Do you have any fancy patterns or designs lined up for the cutting of the outfield?
I’m still working on cutting lines straight in the first place let alone fancy patterns, but I’ve seen some exceptional efforts down south that I might trial eventually. But the quicker I can get the outfield cut nicely the more time I can spend on improving the match pitches.

7. What are you most looking forward to as being Head Groundsman at Mannofield?
Friday night on the balcony in the sunshine with the ground all prepped for the Saturday league match, overlooking my kingdom. / Learning to play dominoes so I can dominate the social league.

8. Should we expect to see any difference in the pitches or outfield when we do return to cricket?
It’ll all come down to time and weather conditions as it always does, might change the colours of the stumps up, sure I’ve got some glitter paint in the garage. Assuming it all goes well I’m hoping the short spell of cricket we do get in August we’ll have a pitch that does a little for everyone involved.

9. Now you are Head Groundsman is that definitely the end of your playing career?
Never going to rule out not playing again, but at the moment I don’t particularly miss the game and enjoy the ground aspect more. However I am open to substantial cash offers via email.

10. Finally, what would you like to say about the man you are replacing, Ken McCurdie?
I’m very grateful for his patience and willingness to pass on his expert knowledge to someone with as many questions as me. Over four years he has taught me many important lessons both on and off the ground. They are very large boots to fill, he has been such an integral part of Aberdeenshire CC and indeed of Scottish Cricket as a whole over the course of 20-30 years and his willingness to be at the end of the phone at any time has no doubt helped many Scottish groundsmen & volunteers over the years as well. I hope that the speed upgrade from the heavy roller to a motorbike suits him.