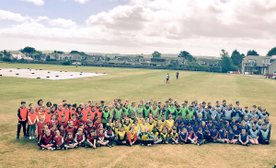 Cricket shines through the storm

With the blustry winds making it difficult to bowl and a sudden downpour taking the teams off the outfield a total of 24 games were played with 2278 runs scored and 175 wickets taken, highest team score of the day 108 from Milltimber helped take them to an overall festival total of 337 from their 4 games.

A great day where the children put the skills they have learned during the coaching sessions into practice despite the conditions with smiles on their faces.