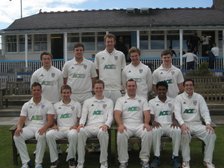 Aberdeenshire's four win run came to a shuddering halt at Broughty Ferry where the Mannofield side were soundly beaten by Forfarshire by 230 runs in a totally one - sided game.

Shire captain Chris Venske conceded his team had been well beaten when he said: ''We were completely outplayed in every department. Right from the start they were on top of us when they batted.There were very few positives, although Findlay Anderson bowled well, and our professional Akshu Fernando hung around for a solid 36, but 91 all out is unacceptable, even allowing from some strange decisions given against us. But it's only one game, and hopefully we'll bounce back against Carlton at Mannofield on Saturday. They have only won one game, so it's up to us to re - group, and just get on with it.''

Forfarshire were quickly into their stride with their top order batsmen all enjoying success at the expense of the generally ineffective Shire bowling attack. Chris Greaves was particularly hard on the Shire bowlers, hitting a superb 93, while Rory Johnston filled his boots with an equally impressive 61. Scotland player Michael Leask then got in on the act, the former Stoneywood - Dyce player's belligerent 54, setting him up for a crack at England next Sunday.

Scott Cameron was there at the end of the innings on 50 not out, while Craig Wallace weighed in with a lusty 38 to complete the misery for the Aberdeen side, leaving them 322 to win.

Shire's reply in stark contrast was stuttering and uncertain, apart from Fernando's assured response which yielded a gallant, but futile 36, made harder for the talented Sri Lankan by the fact that none of his team mates were able to chip in with contributions of their own.

The defeat means the Mannofield men drop down a place to fourth, though if they turn in more efforts like this 230 run reverse, the rest of the season will hold more heartache.

The lack of quality change bowlers in the Shire attack is of particular concern in a side that has considerable potential, as demonstrated in the five opening games of the season, and once openers Venske and Kenny Reid find their touch, the rest of the season could see them claiming a respectable mid - table position.